“ Harding is a self-effacing presence, leading from behind, but his supremely sensitive drumming is crucial to the success of the project, managing to swing hard and drive his soloists to greater and greater heights without ever overwhelming them with extraneous volume. ”
(Eddie Myer, June 2019) 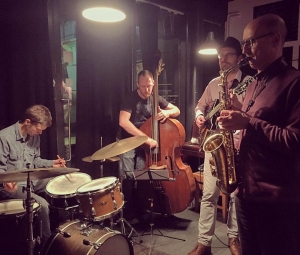 Daniel enrolled at the musical foundation course in Holstebro, Denmark in 2006. He found himself playing gigs in the local area within a week. In 2008 while still at the music school, he received the Bendix grant for showing great development and having a fine understanding of sound and musical touch on the instrument.

Originally from Denmark, he moved to London in 2009 to study Jazz and percussion, and has since established himself as a drummer, educator and author in the UK. He has published a drum instruction book dedicated to Jazz drummers. He has performed with the London Jazz Orchestra and lead projects featuring saxophonist Martin Speake and guitarist Hannes Riepler. In 2014 he graduated from Trinity Laban Conservatoire, earning an MMus degree prior to which he graduated from the Guildhall School of Music and Drama obtaining a 1st class degree and received the Maldé Jazz Prize for best final recital. During his studies, he was also a prize winner of the audience’ votes, at the Chartered Surveyors Jazz competition at GSMD.
In 2018 he self-released his own drum book “The Sound of Jazz Drumming – creativity and development in melodic phrasing”.

“In the midst of creating, a person is raised to another level of consciousness that doesn’t have that much to do with everyday thinking. It’s as if you could imagine life before there were words”  — Charlie Haden